The protagonist of this exhibition is space; the space and its people. The intention is to listen and see this space as it is, and show its different facets through an artistic journey.

The works are the result of the artists’ interpretation of the space and the stories told by the participating neighbours themselves. I am very proud of this project, thanks to the fact that these wonderful artists have had the sensibility to listen actively, taking an interest in the passage and its people. 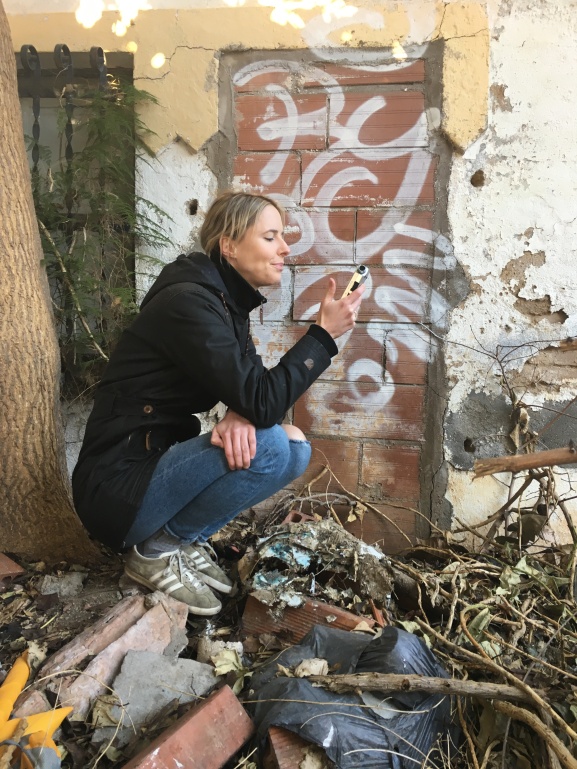 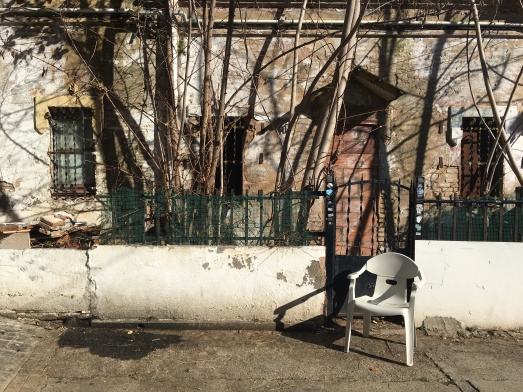 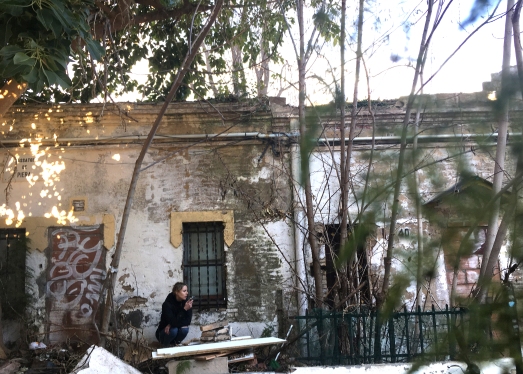 i.
The pages of the walls
fragile as concrete
Wrecking balls
Like doves gone

A passage paved over.

The audio piece was conceived as an introduction to the Passatge de Piera. Upon entering the lane the visitor is taken in by the visual contrast between the new high rise flats in Les Corts and the small shabby ground floor houses in the Passatge; it feels like entering a village.

Rachel’s subtle audio piece sets the tone. It is dedicated to Señora Agustina who suffered mental disease after the unexpected death of her husband. Augustina who lived in the abandoned house 3 was often heard speaking to herself and lived in very bad conditions with no water nor electricity until the community of neighbours created a special task force to bring her house back to humane conditions after four intense days of labour.

In Rachel’s intervention the visitor witnesses a single chair and a beautiful voice singing, lamenting and contemplating the space.

At the end of the event, Rachel performed a tribute to the current state of the Passatge. 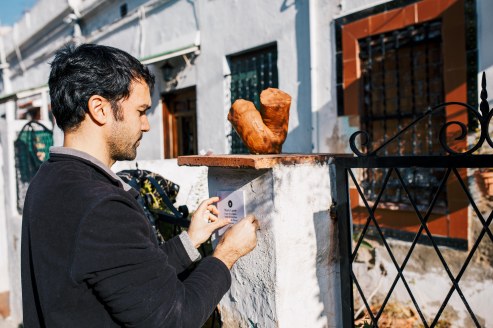 Marc Larré contributed to the project in the Passage de Piera by creating a group of clay pieces that seek to record the moment of transit being experienced by the evicted neighbors of the passage. When still fresh, each clay piece came into direct contact with the door of a bricked up evicted house at one end, and the main door of the block of flats the same neighbours will inhabit at the other, making each piece the materialization of a distance, a space of transit between two places and two temporalities.

Marc’s intervention fits into a series of works that investigate the relationship between photography and clay based on the concept of a footprint. 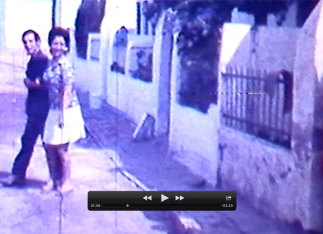 Whilst exploring Passatge de Piera, the visitor enters a house which was bricked up and specifically reopened by the local authorities for this exhibition. A house filled with the traces of memories passed through generations. In its front room overlooking the street, the visitor discovers “Encarna” by Lola Lasurt.

Using René Magritte’s poster for the 1947 International Film and Fine Arts Festival of Brussels as a base, Lola creates a huge portrait of Encarna García, neighbour and family friend living across the street in Passatge de Piera, 11.

Using the canvas itself as a screen, upon Encarna’s forehead Lasurt projects two super-8 videos: one executed by the artist during the summer of 2018, and another from the 1970s filmed by the late Julián Hernández Simón, resident of the house the artwork is presented within.

Chromatically, Lasurt uses the same color combinations that decorate the walls of the Encarna’s house, now bricked up: carmine and reddish orange in the living room and carmine with turquoise blue for the bedroom.

The work brings into play aspects of the composition and poetics of space, closely linked, not only to the physical spaces we inhabit, but also to the organization of our psyche. The work serves as a testimony of this home from an intimate perspective in a process of loss. The creation has advanced in dialogue with Encarna and has tried to accompany her transition process. Lasurt made a second portrait for Encarna, thus maintaining the memory of the color combinations of her old house in her new apartment.

As the visitor enters deeper into the heart of house number 14, one discovers a fridge standing alone in between the kitchen and the living room. It is full of artifacts and what seems like some sound coming from within.

The outside of the fridge – or the time machine as seen through the eyes of the artists – gathers familiar and historical reminiscences and artifacts from Passatge de Piera collected by Ashche and Medici, creating a central narrative in the family life of Juanita, Julián, Sonia and Noa, last inhabitants of this house. A house full of subtle traces of the generations of lives contained within.

Continuing with the time machine concept, the artists captured and collected the natural smells found around the house, varying from the scent emitted by the drinking cabinet in the living room, to the old wardrobe in the main bedroom. They called these “essences” and placed them on top of the fridge.

This idea ties up with the notion that this small house, once containing the lives of up to eight family members spreading across three generations was recently evicted and bricked up: encapsulated. The house, like the fridge, preserved the smells and traces of life within for two months before being opened up specifically for this event. Afterwards, it was bricked up again awaiting its final destiny, as does the food held inside a fridge, that when not made use of, putrifies, to be discarded.

In his artistic intervention Netai Halup uses and recreates objects found in some of the walled houses of the Passatge de Piera. His structures are tense, fragile and work with balance, sensations that are relevant to this last stage in the life of the passage and what remains of the Colònia Castells.

In his first installation, the artist interacts with the inner courtyard of the evicted house of Passatge de Piera number 1. The visitors can only see the installation by peeling through holes in the wall. A performative act highlighting that we are peeping into the lives and current situation of these neighbours from the outside.

In his second intervention the artist works with the concept of temporal and spatial connection. In this case, his installation connects the recently vacated houses of Mari and Encarna with the void left behind after the house that was just behind was demolished.

Halup uses cement, the same material used to wall the houses, to extend the life of found objects, encapsulating and preserving what has been discarded and left in the intense moments during the transition from a known life to a new one. 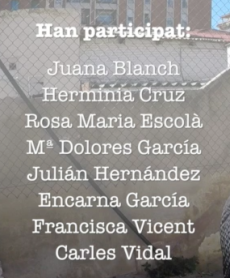 After getting acquainted with the history and community of Passatge de Piera, the last road left of the Colònia Castells, the visitor is invited to walk to and contemplate the open space that made up the colony, once composed of 117 small houses and 4 passages.

Sitting on the benches of the park, the viewer can listen to the memories narrated by some of the neighbours of Colònia Castells. Each evening the elderly brought out their chairs and sat at the entrance of their homes, watching the children play while their neighbours did their daily chores, neighbours who organized outdoor meals and festivals together. The most reknown of which was the festival of Sant Joan, with its big bonfires in Carrer de Montnegre; memories of the local grocery store, the La Campana bar and the R. Ruiz Winery Bar, among others. 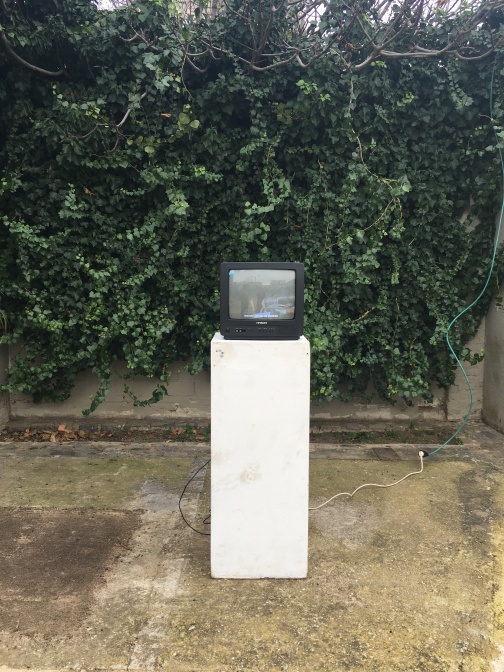 [NO-RES] is the chronicle of the last days of life of Colònia Castells, one of the few factory colonies left in Barcelona. With the demolition of its low houses and its narrow streets, a very peculiar relational microworld will be buried, as well as a very human way of understanding the urban space, on the part of its beloved inhabitants.

In an observational way, the film narrates three moments of this space that coincide with the end of a daily routine that has remained unchanged for a whole century. These moments are: 1. Life in the colony; 2. The dissection of the colony (taxidermy); and 3. The destruction of the colony

It is a paradigmatic process of urban change that many cities of the West are experiencing. This audiovisual work shows us in a very graphic way the passage from the horizontal city to the vertical city. Inevitably, [NO-RES] also narrates the exodus of its protagonists who were evicted at the end of 2010 and were forced to adapt to an environment almost opposite to that which they have always known. The narrative culminates with the demolition of the houses in which many of the neighbors of the Colònia were born.

The constant narrative of this film is the space itself and the way of life that emerges from it: many hours of sun, absence of traffic, life on the street, contact with neighbors, elderly people taking the cool, children playing ball , etc. In contrast, there is the constant threat of the great avenues of the vertical cities, almost personified by the proximity of the Entenza Street – which borders the Colonia Castells, characteristic for its intense traffic.

[NO-RES] means NOTHING in Catalan. 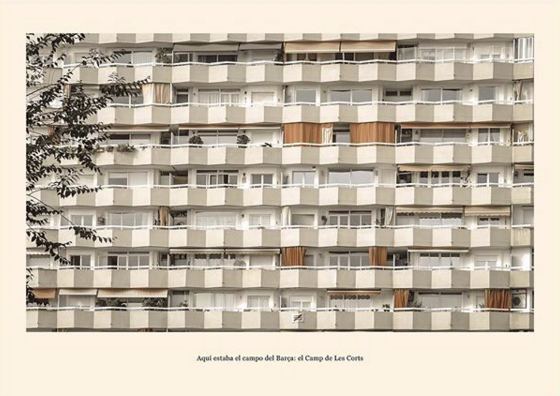 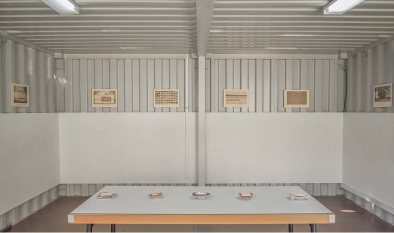 The artistic journey through the Colònia Castells ends in an industrial container. In this improvised space Lucy Costelloe presents “Palimpsesto”.

Lucy’s artwork started from an investigation researching an underground refuge of the Civil War of Colònia Castells. The existence of this refuge was only known because some neighbours referred to it. It had been forgotten in the history of the city and is not on the list of shelters in the area.

This idea of a hidden space, almost forgotten, led the artist to explore other forgotten and disappeared places around Les Corts and to document them through a series of photographs and representations of the objects that now occupy them.

The spaces she documents range from the ancient Roman villas to the disappeared streams of Magoria and Riera Blanca, concluding with the monuments of the Civil War, such as the sculpture of José Antonio Primo de Rivera and the women’s prison of Les Corts.

Lucy’s investigation reveals how we are surrounded by the ghosts of the past, and that, even having been destroyed the physical spaces, these remain due to the lasting nature of the memory.

The works exhibited here represent the remaining palimpsests: the banal objects that have been superimposed on others with the passage of time, presented through photographs and sculptures of resin and clay, representing the layers of the new, synthetic, seemingly disposable, about the ancient, immutable objects of “History”.